I’ve been using Android on my Nexus 4 since 2013 and was quite satisfied with it until I decided this summer that I wanted to try Windows Phone development and the emulator wasn’t good enough to feel the OS and the app.

Long story short, I got my Lumia 640 in July and was amazed how cool the phone and the OS were. The screen is very good, “glance” feature is very convenient so as “Live tiles”, Here Maps app is just awesome, also I’ve made some cool pics with Living pictures app - Harry Potter would approve it. :)

Then there was a moment when I discovered a serious flaw that in time made me switch back to my old Nexus.

The problem is that sometimes bluetooth starts lagging like hell as if something was interfering with it. I don’t know why this happens but it definitely has something to do with other apps running in background. For example, if I use Here Drive app or Viber all at the same time with Music app, then the issue repeats a lot more often.

One other thing I discovered was that it is not working with Chromecast - there is no support for it at all, and even worse there are no plans to support it in future.

The bluetooth issue was so annoying that I finally gave up and switched back to Nexus phone, but unfortunately for the Nexus phone its battery died in a week after I switched.

So I decided to give Lumia a try again and this time I’m determined to find out the root cause of the lagging bluetooth connections.

Here is something I’m going to try first. 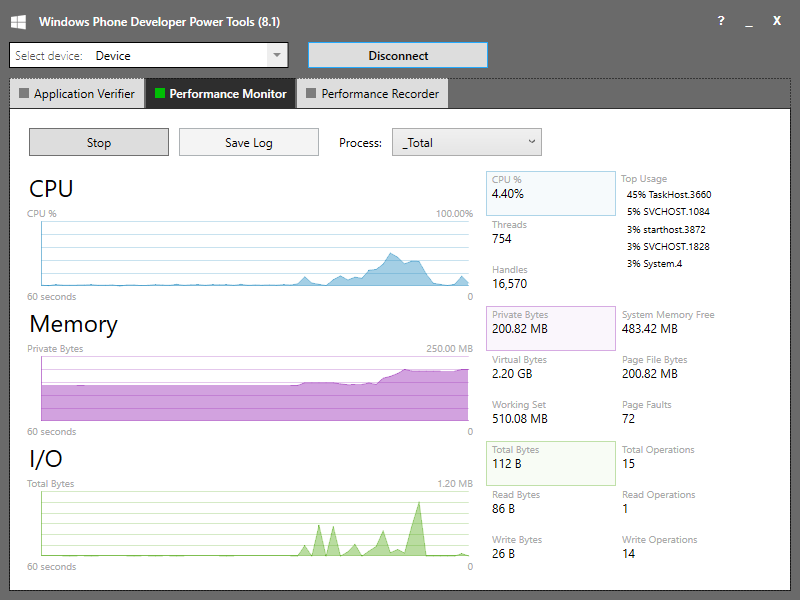 Windows Phone SDK comes with some profiling tools (see above) and I’ll try to use it to find out which app ruins my otherwise perfect phone experience.

It took a while to figure out how to install the phone part of the tools (here is how to fix connectivity issue one might have). Also it looks like there are presets specifically for profiling audio glitches like described here

I will try to catch as much information as possible on what’s happening with the phone when the problem comes back. Perhaps this is good enough to write up another blog post.

UPDATE: August 2016 - I think this was a hardware issue after all. I’ve switched back to Android recently and there are no lags anymore. I miss live tiles though… :’-(